The girls are still hiding out in Seattle, but by episode’s end their cover may be blown at least for one demon faction. The episode, “Things to Do in Seattle When You’re Dead” kicks off with the sisters and Harry all feeling super restless at 5AM. Harry’s puzzling over the assassin with his face and not spilling his guts to the girls…yet. Macy is having some interesting dreams about Harry, but not Harry. And not dreams, right? Maggie is feeling more herself and clearly homesick for her life back in Hilltowne. She’s ghosting her way through social media and stumbles onto some pretty unsettling news that explains one of my questions I had after watching the finale. What will people think of the girls and the house suddenly disappearing? Well, the people of Hilltowne believe that the girls died in the same fire that consumed the house. Uh-oh. Elsewhere, Mel is trying to put a dent into the mess left after Maggie’s birthday bash and that demon attack. Read on for some of my favorite things about episode 2×02.

Dead Girls Don’t Text
How awesome were the bonding moments between Mel and Maggie in the most recent episode? They both had some killer lines. Starting off with that line from Mel when she finds out that Maggie has been using her cellphone to keep on eye on their lives at home. “Dead girls don’t text or use social media”. Maggie showed a lot of growth in the season premiere, but our girl still has some growing up to do. Her upset over the Charmed Ones apparent demise quickly takes a backseat to the revelation that their father passed away. Initially, I was a little skeptical of the timing of this news. I thought for sure that it was a trap to catch one of the girls at the memorial. Turns out that both things were true. It was a good opportunity to learn more about Maggie and Mel’s relationship with their father. We already knew that he was largely absent and Maggie was way more attached than Mel.

We get that beautiful story of the night that Ray was supposed to take Maggie out for her birthday. Of course he didn’t show. Young Maggie was placated with a music box that she was told he’d left to make up for missing the big night. It’s clear almost immediately by Mel’s expression that Ray definitely didn’t show up while 7 year old, Maggie was sleeping. I thought for sure that it was Marisol who left the music box and made up the story to make her youngest child feel better, but nope. It was big sis Mel who was looking out for her baby sister. I’ve always enjoyed this pair, but this moment made me love them even more.

101 Reasons Why Our Harry is Hotter than Dark Harry
Okay, I’m not going to write them all out right this second. We’re only two episodes in and I’m sure we’ll get even more reasons as the season goes along. Yes, Dark Harry can do that smolder thing, has guyliner down pat, and exudes seduction but our Harry is still hotter. There’s the layer of charm about our Harry that the assassin just can’t fake. In the opening of the episode, Dark Harry shows up in Macy’s dream and sure he’s sexy AF but there’s a note of discomfort in Macy that takes away some major points for this brand of seduction. She’s nervous and quickly cinches her rob shut. There’s something mesmerizing and drugging about Dark Harry and he’s urging her to reveal where she is. With our Harry, the obvious chemistry between Macy and Harry is awkwardly adorable. Case and point? That wonderful road trip and Macy‘s attempt to fill the silence and cover her own uncertainty with music. The Barry White-esque sexytimes sounds that pops out is hysterical.

The way Harry says “haberdashery”. I melted a little. His obvious delight when Macy pulled that glamour powder from her purse. When they make their quick change into their demon personas, Macy tells him that he still looks harmless. He adjusts his hair and hits Macy with the smolder. It’s hot and Macy is reminded of Dark Harry. I love that Maggie knew almost immediately that Dark Harry was imposter just because he didn’t go all in on that hug and maybe a little lingering intuition on Maggie’s part. Then there’s the moment when Mel and Maggie show up outside of the 7th Circle Club unsure of Harry’s identity and he gives them the recipe for Marisol’s Cojito.

Our Harry seals the deal concerning any kind of competition with his darker half in the final moments of the episode. There’s nothing quite as sexy as someone letting you in close enough to see the vulnerable parts of themselves and their psyche. Harry does that and manages to console Macy who is upset about the witches they weren’t able to help. Finally, that moment when Macy tells him that they don’t need a signal that disguises him from Dark Harry. All she needs is a look. Go Hacy! I’m soooo here for this.

Seventh Circle of Hell
The demons are so obvious with the name of that club and I seriously loved it. Obvi! How flipping amazing did Madeleine Mantock look in this week’s episode. Major kudos to folks who worked hard to put together that fantastic look for Macy. As the actress put it on twitter, “Macy tryna blag that BDE”. There was plenty of Big Demon Energy coming off of Macy inside and outside the club. The demons inside couldn’t keep their eyes off of our girl. I was very curious to see if that power dampening bracelet would really work on Macy. 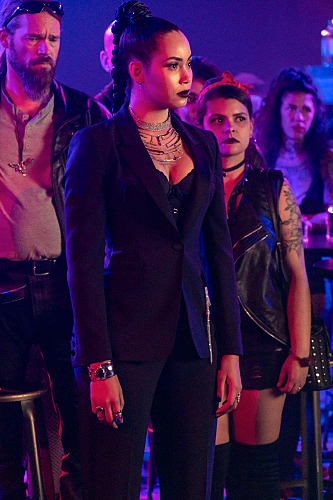 Seems that Macy certainly caught the attention of two major players in the demon world. Godrick who is in charge of the Carnels and Godrick who runs the Primordials. The latter was giving me major Cyrus vibes (circa 1979 Warriors) with his command of the room. Can you dig it? Classic movie. I’m definitely intrigued by Godrick. Also what’s the deal with the Zagan the Great prophecy? The demon factions are coming together with the Elders and whitelighters gone. This appears to be the war on witches that was brought up during the premiere. Very much looking forward to learning more about the different groups (Carnals, Primordials, Malignants, and Vagrants) and exactly which side that Macy’s demon half falls under.

Slow Burn Kinda Chemistry
The girls have all been through a lot and suffered some major losses in the romance department lately. Last season planted the seeds for Hacy to take root and I’m absolutely loving the slow build that we are seeing now. That look y’all! I have no idea what’s in store for Maggie and Jordan but I’ve enjoyed their brief encounters in episodes so far this season. This week he finally learned her name after her impromptu boxing session in a skirt and heels. Sure she bit his head off initially when she thought he was calling her age and abilities to make decisions into question. Of course, he wasn’t doing that. The show has me curious to learn more about him and see him spending time with Maggie. As always you have wonder if this potential love interest may have his own connection to magic.

Speaking of connections. How cool was it seeing Mel and Kat in this week’s episode? I didn’t really get the vibe of Mel looking down on Kat’s interest in Wicca in the first episode. Maybe I couldn’t see beyond those sparks of chemistry between the two ladies. This week though Maggie brought it up and Kat let it be known that she was fully aware that Mel might see her as little more than a “ditzy dime store Wiccan”. Kat senses that Mel might be a soul in distress and she offers her assistance and a warning. Kat’s got a little fire in her. She jokes that if she ever catches Mel stealing from her again, she’ll put a hex on that ass. I believe her. Also, not that she should be stealing, but Mel was really bad at it. Good thing Maggie is getting a job so they’ll have spending money and access to the Witchboard whenever they need it.

What was your favorite line and moment from this week’s episode? What bloodline do you think Macy’s demon side comes from? What happens now that Godrick knows the Charmed Ones are alive? What will Dark Harry try next to get to Macy and her sisters? Also, how adorable was Harry getting flustered with the paper map and lamenting, “I don’t know how people lived before cell phones…even though I did”. Hit the comments section below or visit us on social media.