It’s that time of year again! The leaves are changing colors, Halloween decorations are floating around, and with the school year just beginning, we’ve got you covered with the perfect shows to binge.

Each one of these shows take place with the characters going through the school year and dealing with all of the drama that comes with being a high schooler. (Don’t worry if you’re not a student, these shows are still super fun to watch!) They all have well developed characters that are relatable and fun fast paced storylines that you can fly through.

All of the shows listed below have the ability to transport you into a whole new world and allow you that much needed few hours of escape. Whether you’re in the mood for supernatural type shows or interested in a more realistic one, there is something on this list for everyone!

If you’re looking for an addicting mystery then look no further than The CW’s Riverdale! This bingeable show is a fun spin on the Archie comics and includes a great cast of characters with their own unique plotline.

We follow Archie Andrews, played by KJ Apa, along with his best friend’s Betty, Jughead, and Veronica as they discover their town is full of hidden secrets waiting to be uncovered. With romance, mystery, friendship, and murder, this popular show is something that needs to be on everyone’s watch list.

Riverdale is currently still on air and returns for its fourth season on October 10th. This leaves fans with plenty of time to catch up on Netflix before it returns!

Perhaps one of the most well written and well developed shows ever, The CW’s One Tree Hill is a must watch! With its addicting and dramatic storyline, this show will touch your heart in the best way possible.

One Tree Hill follows outcast, Lucas Scott, who joins the school basketball team that his rival half-brother plays on. Lucas begins to develop relationships with not only Nathan, but Brooke, Peyton and Haley, while their parents have to face their messy and intertwined past. This show tackles romance, heartbreak, friendship, love, family and life.

One Tree Hill wrapped up with a successful nine seasons and continues to be loved and treasured years after its final episode. Old fans and new fans are constantly falling in love the story and are finding their home within the town of Tree Hill. You can go binge all nine seasons on Hulu!

Taking a turn into city life, Gossip Girl remains a classic drama. If you’re into the finer things in life, this is the perfect match for you! With scandalous secrets and emotional romances, this is one viewers fly through!

Following the prestigious and privileged life of teenagers in the Upper East Side of Manhattan, this story follows Serena, Blair, Chuck, Dan, and Nate as they maneuver their way around a mysterious blogger who calls themselves Gossip Girl. Gossip Girl is always watching and updating the world on all the scandals and secrets surrounding the elite.

Gossip Girl completed with six seasons and is still widely loved. This timeless classic is available for streaming on Netflix!

We follow single mother Lorelei as she raises her daughter Rory in the small, close knit town Stars Hollow. The friendship between the two is one of the highlights as they navigate life together, trying to fulfill their own aspirations and juggle their complicated romantic lives.

Gilmore Girls ended with seven seasons and it can be binged on Netflix along with the revival! Ahhh

Now, we recommend you journey to upside down, with the popular, Netflix original Stranger Things. If you’re looking for something creepy with that paranormal twist, you’ll devour Stranger Things.

Set in 1983 in Hawkins Indiana, this show follows the adventures of a group of kids, one with telekinetic powers, as they search for answers to find their missing friend. Things get really strange when a government created alternate dimension is revealed called the upside down, a parallel world filled with monsters.

Fans can watch all three seasons on Netflix!

If you’re in the mood for a kickass paranormal show with a swooning romance and a headstrong female lead, then Joss Whedon’s Buffy the Vampire Slayer is for you!

We follow Buffy Summers who finds out she is the chosen one and must protect her town of Sunnydale from the forces of evil. With the help of her watcher Giles and her friends Willow and Xander, Buffy learns to accept her destiny as the slayer and embraces who she is. Filled with heartbreak, romance, and adventure this is a series you don’t want to miss!

Get wrapped into a world of vampires and romance and start streaming all seven seasons of Buffy the Vampire Slayer on Hulu! If you’re looking for a mix of supernatural romance, horror, and drama then you will become addicted to The Vampire Diaries! The captivating town of Mystic Falls will draw you in and the supernatural elements will leave you on the edge of your seat. Not to mention the romance is swoon-worthy! (team Stefan or team Damon?)

We follow Elena Gilbert, a teenage girl who is dealing with the recent loss of her parents. Meanwhile, vampire brothers Stefan and Damon Salvatore return to Mystic Falls causing a whole lot of trouble for Elena and her friends. Elena’s world, and the whole town is turned upside down as her and her friends struggle to keep it safe from vampires and other supernatural creatures.

All eight seasons of The Vampire Diaries are on Netflix! And if you fall in love with this world and want more, be sure to check out the spin off shows The Originals and Legacies.

MTV’s Teen Wolf, is a thriller full of drama, friendship, and amazing ships that will honestly ruin your life (in the best way possible). This is definitely a roller-coaster you want to make sure you get on!

Scott McCall just wants to be a normal teenage guy and fit in at school. He wants to hangout with his best friend Stiles, date the new pretty girl, and make the lacrosse team. However, his world is turned upside down when he is bit one night by an animal in the woods creating a tumultuous path filled with new enemies and creatures. As if high school isn’t stressful enough, now Scott must deal with his new abilities and try to keep his friends and town safe.

All six epic seasons of Teen Wolf are available to stream on Amazon Prime!

Every wonder what Clark Kent was like before he became the all powerful Superman? Smallville tells this heroic story about the young superheroes journey, beginning in his freshman year to adulthood. He faces all tribulations and drama that a young high school does, while also discovering more about his abilities and his past history.

You’ll see iconic characters in the show such as Lana Lang, Lex Luther, Lois Lane, Oliver Queen and Jimmy Olsen. Not to mention some epic fights with villains like Zod, Brainiac, Doomsday and Bizzaro! Fans of the comics will have so much fun seeing characters they know come to life in this legendary show.

If you love The Flash, Supergirl, and Arrow, then all ten seasons of Smallville is a definite must watch. It was recently announced that Tom Welling, who plays Clarke Kent, is set to be in this years crossover. So now is the perfect time to binge Smallville (Available on Hulu) and get excited to see him with our other heroes from The CW!

What are some of you favorite fall shows to binge? Have you seen any of these? One thing is for sure, we’ll be cozying up with our pumpkin spice lattes rewatching these classics! 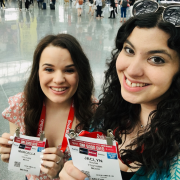 ‘The Magicians’ recap: Brad and Cort Talk Ep 5×01, “Do Something Crazy”