The anticipating wait has finally arrived, as we join Alison and Mona’s journey in Beacon Height’s for the PLL spin-off, The Perfectionists.

Alison is in need of a fresh start away from her previous life and Mona is still up to her usual games. The duo is in motion, but whether they work or not, that is the true question.

The Perfectionists starts in the true PLL form of an eerie vibe and Lady Gaga ‘Just Dance’ in the background played on a cello.

We see Alison DiLaurentis in her car, travelling to Beacon Heights and her new home, where she will start a teaching job at the Beacon Heights University as a literature TA. 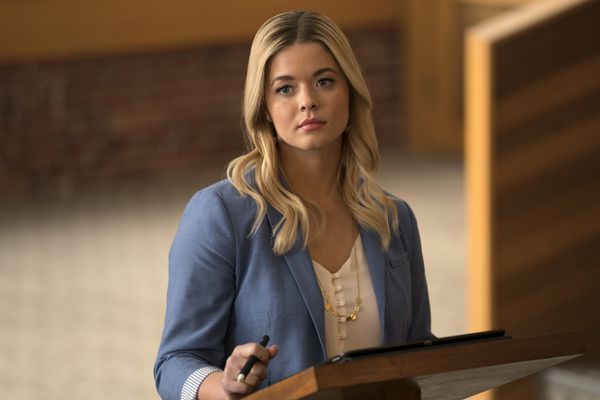 This causes for a LOT of questions – why is Alison travelling alone? Are her and Emily okay? Are the twins okay? What’s going on!?

Alison begins settling in to her new home and is greeted to someone at the door. For Alison, this is a fresh start for her, so who on earth would need her?

Surprise, surprise, our favorite most powerful and insane woman of the hour has returned – Mona Vanderwaal.

Mona seems to be doing very well, considering all we witnessed her go through on PLL, however, something still seems slightly off. Her boundaries are for sure one thing that hasn’t changed, as she stands at Alison’s front door with a butcher’s knife in one hand and luckily for Alison, a pie in the other. I think at this point, pie is definitely an easy way to rid the shock away of Mona’s return also. This duo just can’t mix well at all and I don’t see it progressing for the better any time soon.

Alison feels deflated over the fact that Mona is around, as she accepted her new TA job thinking that this would be a fresh start, where no one knew about her or her past and she could go from being a mean girl to mentor.

However, Mona is here to stay and make sure that everyone is comfortable around the campus, whilst also still being as creepy and possibly even more so.

During Alison’s first day of teaching, we are introduced to the quartet we need to get familiar with, including; Nolan, Caitlin, Ava and Dylan.

From what we see, we believe that they are a close and tight-knit sort of group, although something about the four of them seems a bit off. Would these four people really hang out with each other?

Nolan is the wealthy and prestigious son of the Hotchkiss’, a family who basically runs the entire of Beacon Hills. We learn that his sister, Taylor, who dedicated a lot of her time to help students, had committed suicide a year before the present day. Nolan is very used to getting everything he wants, whether that be with the school, his friends, his relationships and his parents. He is the ultimate golden boy.

Caitlin is an ambitious student with straight A’s, is athletically talented and is on the honor roll. She is currently known as Nolan’s girlfriend still, although in reality, she has moved on with their past relationship and is secretly seeing her new boyfriend, Jeremy Beckett. We learn that Nolan is blackmailing Caitlin to put on a front as his girlfriend, to upkeep the portrayal of his perfect life, or he’ll reveal her mothers secret. 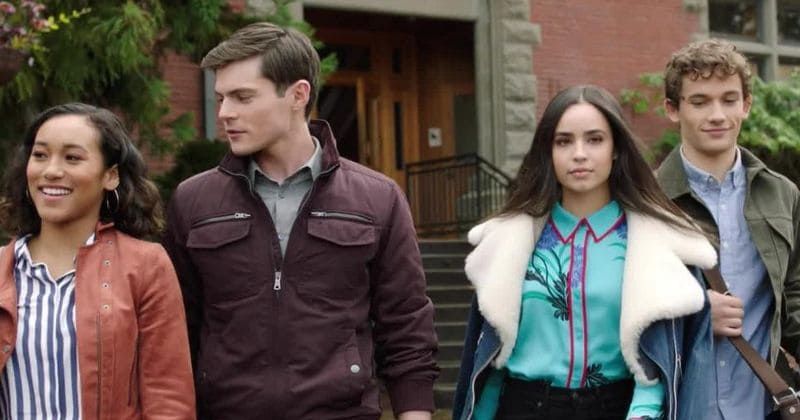 Dylan is an aspiring cellist, who used his passion for music to escape his home-town, where he was looked down upon for being an out gay kid and was subjected to brutal bullying. Dylan is now openly out in Beacon Heights, where he is more accepted and is currently dating Andrew. During a hang-out between Nolan and Dylan, he is coerced by Nolan in to a romantic situation, in which they make out and have sex. Knowing that this could hurt Dylan and Andrew’s relationship, Nolan blackmails Dylan in to being his perfect friend, whilst also doing his and Ava’s papers for them.

That leads us on to our final member of the Quartet, Ava. Ava is a stylish trendsetter, holding a big personality. She grew up in a picturesque and wealthy household with her parents, however when her father was being investigated for embezzling millions of dollars from his company, he fled the country without informing Ava or the mother. Her mother, afraid of the scrutiny her husband left behind, also fled days later, leaving Ava to fend for herself. Nolan doesn’t have anything on Ava, but during the time of her father and mother’s disappearance, she relied on Nolan to support her.

It turns out this perfect friendship group isn’t so perfect after all and it was all conducted by Nolan for his own entertainment.

Secrets were made to be told

Not only does Nolan hold these three ‘hostage’, but he also hints to Alison that he knows of her past, making her unhappy with the information and skeptical of the boy.

Alison tracks down Mona and insists on knowing how many other people – if there any – know about her past and if Mona was the one who told.

Mona tells Alison that she hasn’t talked about her past with anyone, but who’s to say she’s not lying? We know she’s pretty damn good at that.

Mona catches Alison up to speed with Nolan Kotchkiss. He’s manipulative, intelligent and potentially dangerous. He doesn’t belong. This could just be Mona’s judgement of him, however, she’s not wrong so far.

Perfect squad not so perfect anymore

I don’t think Alison got half enough credit as she should have for her intelligence, and she further proves that too many of us slept on her.

When marking the papers based on Agatha Christie’s book ‘And Then There Were None’, Alison catches on pretty fast that Dylan, Ava and Nolan’s papers all sounded extremely similar.

She already understands that Nolan is the leader of their group and holds quite some power. She even comes to know so soon, that he holds enough power for them to continue living in his world of being the ‘perfect friends’.

Everyone has stood for it, but Alison won’t.

The Hotchkiss’ host a welcome back party and Alison takes this as an opportunity to speak to Caitlin, Ava and Dylan individually.

Alison first speaks to Nolan’s mother, Claire Hotchkiss, in which she learns that she is very controlling with Nolan and has to have everything her way, just like her son. We even see Claire using surveillance over Nolan, worrying that he is seeing Ava, who currently is surrounded by a bad reputation, and believes that Caitlin is the perfect girl for him.

Alison then speaks to Dylan who informs her of everything Nolan has against them, immediately making Alison feel responsible for whatever may happen to her three students.

Remember when I mentioned Nolan’s sister, Taylor, who committed suicide a year ago? Well… turns out she isn’t actually dead and Nolan has been working with her this whole time.

*Pretends to be shocked.* 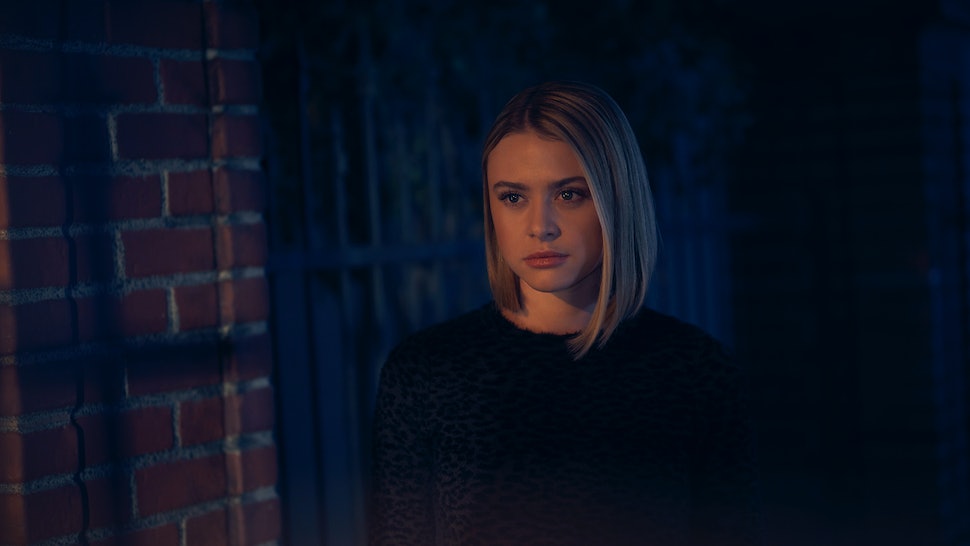 We learn that Taylor didn’t actually commit suicide and is a striking resemblance of Alison.

Taylor is currently well and alive, living in the woods, possibly either hiding from the surveillance of her family, or she has a whole other plan in mind.

Whilst Nolan and Taylor were concocting plans together – Ava, Dylan and Caitlin were all in the woods strangely fantasizing about wanting to kill Nolan and how they’d do it. The most agreed one being pushing him off his home, allowing him to be impaled by gates.

The gang break away from one another for the night and will continue how to bring Nolan down the next day. 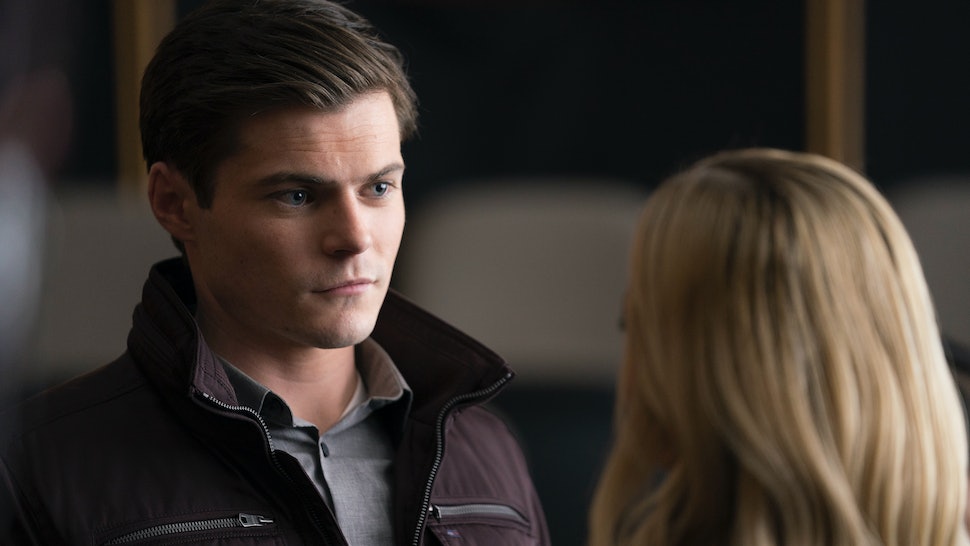 Meanwhile, watching the gang from above, Nolan meets someone covered up by a hoodie to talk about Taylor. This gave me serious A vibes, although I don’t think we’ll have another A anytime soon. So, who could the hooded stranger be?

Whoever it is, clearly has it out for Nolan and was eavesdropping on the three in the woods, as through the night, Nolan is found impaled on the gates by the building he was stood on. The exact way the three imagined it.

During the time of Nolan’s murder, Alison is seen stripping the wallpaper in her apartment and comes across those big, red, eerie words, “They’re watching”.

She see’s the police lights through her windows, follows the crowd and see’s Nolan’s body still impaled in the gates, dead.

Who’s watching and what do they want with our Alison? Leave her alone!

If Nolan’s death and the words “They’re watching” printed on Alison’s wall isn’t intense enough, when Mona see’s Nolan’s dead body, she rushes to the bathroom and starts talking to herself in the mirror.

“What the hell just happened?” “Was this our fault?” Mona manically says through the mirror.

The camera pulls away and we see that Mona is in fact, not speaking to herself, and is talking to people monitoring an entire surveillance room, most likely Beacon Heights headquarters. The room has multiple little screens on the wall, showing different places of Beacon Heights, one showing Mona in the bathroom.

Of course Mona had something to do with, how did we not realize? Who is she talking to? Is that who killed Nolan or is there a whole group of them? Is it someone close to him like Taylor or his mother? Or is it someone he’s blackmailing seeking revenge?

I highly doubt we’re going to know the reveal any time soon, but I can’t wait to keep digging and get to the bottom of it!

What did you think to this episode of The Perfectionists? Write up a comment and let us know your thoughts!

Watch The Perfectionists Tuesdays on Freeform.