As I stated in my release day review, Black Panther is excellent. Everything about it intrigues me from cast and crew interviews, to the many cultural influences on the movies to Ryan Coogler’s personal experiences visiting Africa for research purposes. After scouring the internet as a test of my own objectivity, I have only found a few minor nit-picky complaints. The CGI (which I enjoyed), a few lines (like M’Baku’s joke about being vegetarian) and the movie’s “political agenda.” That last one is interesting, not only because EVERY MOVIE EVER MADE HAS AN AGENDA. Not to mention art in general. Wakanda’s isolationist history spoke largely to this fact, but the even bigger message was illustrated by one character: Erik “Killmonger” Stevens. In addition to being an amazing “villain,” he speaks with the frustration of black people all over the world.

A major criticism of Marvel Studios’ films is the lack of interesting, multidimensional villains. With the exceptions of Loki, Ego, and the Vulture, the MCU’s villains have all been fairly bland, thinly-motivated copies of the heroes. In every introduction movie, the villains seem to only exist as a way for the heroes question themselves by literally fighting their mirror images. It showcases their abilities well (particularly impressive in “Ant-Man”), but it has all begun to feel very by the numbers.

When asked, I’ve always declared my favorite MCU villains as Killgrave and the Kingpin, who only exist in the Netflix series. They are well written and deserve the praise, but that answer is honestly a technicality. They’ve both had the benefit of several hours of screen time to be developed, as opposed to the one appearance the movie villains get (except Loki). Most people don’t even realize those shows are even part of the MCU! However, they definitely are! So are Agents of S.H.I.E.L.D., Agent Carter, and *shudder* Inhumans, but none of their villains have had any lasting impact thus far.

This time, even though the the clone dynamic still exists, Black Panther delivers a villain who is so compelling, it makes everyone question whether he was right or not. His methods were surely too brutal for anyone to agree with, but his motives were definitely worth looking into. The filmmakers even acknowledged this by making the first scene of the movie a part of the antagonist’s origin story instead of the hero’s. He may not have been completely accurate to the C-list villain from source material, but this is a rare case where maybe the comics should be retconned after this.

No Wakandan Left Behind

Killmonger’s journey reflects the individual experiences many of African Americans as well as the history of African Americans in general. Having to grow up without his father’s presence is something a lot of black children had to deal with during the 80’s and 90’s during what is known as the crack era. In a time where a failing education system and poverty were running rampant in African American communities throughout the United States, families were suffering, but sticking together. The introduction of crack cocaine in black neighborhoods destroyed what was left through the horrors of addiction and mass incarceration. Luckily, those statistics have improved over the years, but this was the era Michael B. Jordan’s Killmonger grew up in.

We are shown multiple times in the movie that Erik Stevens’ father, Prince N’Jobu, is a decent man, but his death at the hands of his brother left his son to be raised without him. With the exception of the notebooks and artifacts his father left behind, this completely disconnected him from his homeland and culture and attached him to anger and sorrow. The loss of his father and his abandonment served to be his own personal Middle Passage. Though not a physical journey, it was definitely an emotional one that shaped the rest of his life.

The one thing I wish we had gotten more of was Killmonger’s mother. One of the many, many things the film has been praised for, is its portrayal of powerful women. However, the massive influence of this one woman was a little glazed over. During T’Challa’s questioning of Zuri, the elder explains that N’Jobu met a woman who radicalized him, causing his betrayal of Wakanda which leads to every other event in the movie. If she was a member of a militant, pro-black organization, she likely raised her son to follow her ways, similar to Afeni Shukur and her famous son Tupac. That would explain Erik’s Malcolm X, “by any means necessary” approach to building equality for black people around the world.

The continued discrimination and mistreatment of dark skinned people as a result of the African diaspora is something that is on nearly every black person’s mind in some form or another. They all wonder what life would had been like if they had not been taken and traded as possessions, only for their home continent to be constantly attacked and manipulated for its mineral wealth. Wealth that is not shared with the inhabitants of the land itself. This is the world Killmonger lived in and wanted to change. Once he had knowledge of his father’s homeland, an African country that was not pillaged and had the power and technology to have prevented it all, he was determined to make them fix it.

He wanted to be a hero to the people of the world he had watched suffer his entire life. A broken boy became a psychologically scarred man filled with rage and a singular purpose. After finding his father’s body, learning of the Rite of Combat and living with a radical mother, the only way he knew to affect change was through violence. This was consistently reinforced by his military career, in which he frequently killed to destabilized governments as explained by Everett Ross. Challenging T’Challa for advanced weaponry and conquering the world in the name of forced peace was the method the world had shown him to be true. Family or not, his cousin was in the way of saving his people.

There was a definitive ugliness in Killmonger that made us recoil from him. Violence had become such a part of his life that he had grown to enjoy it. His anger is apparent in everything he does. His ruthless grin when anticipating a kill and his killing of his companion and lover show us someone to fear, but his motivation is never in question. His disdain for European descendants is revealed in his very first scene, his plan is openly revealed to everyone except Klaue, who he needed to manipulate. Even his last words are a lament for everyone he sees as his extended family. Everything he did, he did in the name of equality. He even had chances to abandon his quest for wealth, but that wasn’t important to him. Killmonger could’ve possibly introduced himself and asked T’Challa for help, but that wasn’t his way and he preferred control over diplomacy.

Even T’Challa, who had been out in the world, was hard pressed to disagree with his “enemy’s” purpose. He rebuffs his father and all of his ancestors for their turning their backs on the world and leaving Erik behind. He even sees the nobility in his cousin in the end and offers to save him, likely in hopes that they could work together after some rehabilitation. Killmonger’s appearance forced him to question everything he knew, and that, combined with advice from Nakia, is what made him decide to share the true Wakanda with the world.

Magneto and Professor X were specifically created as allegories of Dr. Martin Luther King Jr. and Malcolm X, but these two are a much stronger parallel. They wanted the same thing, but their methodologies were vastly different. Audiences everywhere left the theater wondering which of the two were actually right. When there are two sides of a story told, the truth is always somewhere in the middle. Killmonger wanted to save his people just like T’Challa, but his definition of the word was much bigger than his cousin’s. His methods were brutal, but so were those of many real life historical figures we praise as heroes. Shaka Zulu, William Wallace, Alexander the Great, and many more shed blood for freedom. The only thing that truly makes this Wakandan exile a villain is the fact that he lost.

I mourn the loss of N’Jadaka, son of Prince N’Jobu. Eric Stevens. The Killmonger. 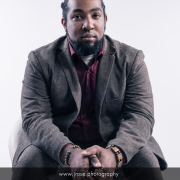 Born and raised in New Orleans, Louisiana. Jonathan Thomas Jones was molded from swamp magic, cosmic dust and spare parts. He's always loved reading and storytelling and has known he's wanted to be a writer since he was nine years old. Starting with short stories, he has moved all the way up to novels and has now taken the steps to helping younger generations understand the world and themselves by writing children's books.