It’s September guys, and we all know what that means…

It’s Halloween time!! Yeah, we as a society love to milk that shiz until it has run dry into Christmas time, but hey, it’s fun and spooky and you ENJOY IT. *insert all of the pumpkin emojis*

So in honor of my fav holiday, I’m going to be bringing you an epic countdown of my top 5 favorite horror games of all time for the next five weeks! Along with my feedback on the game, I’ll rank how scary it is on my patented 1-10 scale, the Scare O’ Meter. YAS HALLO-QUEEN. Sorry, not sorry.

Alright, without further ado, let’s get to my number 5 pick. HERE WE GO.

Ah yes, killer alien zombies…a personal favorite. Developed by Electronic Arts (EA) in 2008, Dead Space shoved its flag into the gaming world by being a completely bonkers sci-fi, action, horror combo. It seems like a bit much in retrospect, but the game set a new ground for modern scary stories from beyond the stars (sounds weirdly Twilight Zone-esque). Nonetheless, it’s a powerful game that manifested some pretty horrifying creatures and situations that not only mess with your big ol’ brain, but just plain gross you out all together.

Without giving away too many spoilers, the game starts out explaining how Earth has basically become a wasteland due to our terrible and reckless acts as a human race (see, already predictable *cries softly into pillow*). The year is 2508, we’ve inhabited space (duh) and big o’l ships deemed “planetcrackers” are robbing planets of giant masses of ore and terra to extract their resources in order to keep the human race a float. You play as an engineer named Isaac Clarke, who works on the USG (United Spacefaring Guild) Kellion, that gets a distress signal from another ship, the USG Ishimura (the ship that your character’s girlfriend just so happens to be working on, OF COURSE).

Something gets screwed with your ship, so instead of docking like you planned (even in space you can’t get your shit together), you crash land into the Ishimura with all of your little might. While looking for a way out, they discover these crazy freaking creatures, called Necromorphs, that are trying to kill you and everyone still possibly left alive on the ship. You’re assigned by your two other crew members, Commander Zach Hammond, and Com Specialist Kendra Daniels, to go in and do your best to keep the ship running until you guys get rescued.

Yeah, these mofo’s are ugly as ugly gets (and it gets a million times worse).

Aside from the story, the actual gameplay is pretty cool. The situations are high pressure and make you think quickly on your feet in order to survive. There are some really neat attributes, like the fact that there isn’t a heads up display. Instead, all of your info is relayed to you via hologram through your B-A spacesuit (RIG), where you can check out your map, your inventory, and video feed. But the game runs in real time, so the longer you spend in the menu, the more danger you put yourself in by being an open target. BUT HOW FREAKING AWESOME IS THAT!? The amount of tension makes you think as logically and as quickly as possible so you don’t make a mistake and get yourself wasted. Pressure like that is undeniably real.

From your flamethrower to your plasma cutter, the weapons in this game are bomb. Your goal is to basically cut the limbs off of these things so they can’t stab you with their knife arms, so your weapon range doesn’t feel boring or static when your slaying Necromorph ass. There are also zero-gravity situations where you have to get around using magnetic boots, and areas where you have to be quick and effective because of toxins in the air that will ultimately become an issue when your oxygen supply drains (suffocation is not fun, kids).

I have to say that there aren’t A TON of flaws with this game, but the problems that it does have feel major when it comes to actually deeming it a ‘horror’ game. During your time on the Ishimura, you come across the ability to practically stun your targets in mid air so you can shoot them more effectively…Yeah, it’s kinda weird. Honestly, it takes away a lot of the fear factor and the intensity that you should feel when facing an opponent as disgusting as a Necromorph. It gets kind of…predictable. Most of the horror aspects of the design rely only on jump scares, which, in my opinion, don’t really make a game ‘scary’.

Overall, Dead Space is a fun and interesting game with an intriguing story to tell (it has 2 other games proceeding it, due to it’s successful gameplay). Yeah, it isn’t the best horror game to ever hit shelves, but damn, it’s pretty fun to play. Even if you are a horror aficionado, I say it’s worth giving it a shot. Playing the game that opened the door for a super successful franchise and a new era of sci-fi thrillers can open your eyes to something you may not have seen or tried before. And if you don’t like it, just spit it out into a napkin and throw it in the garbage. We’ve all done it, it’s not THAT weird.

Click here to check out the trailer, and see the galactic spooks for yourself.

SCARE O’ METER: 5/10 – Casper the Friendly Ghost…if he were a bloody and dismembered mess.

Check back next week for #4! 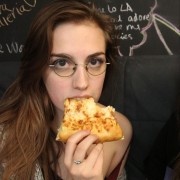 Sam is just your average sci-fi loving, pizza eating, happy-go-lucky lass. She is an LA based comedic actor, writer, and blogger, who is the founder of her own film company, Fish Tank Productions. Some of her hobbies include long walks on the beach, Doctor Who marathons, catching Pokémon in Kalos, day trips to Coruscant, and having second breakfast in the Shire. ‘Game of Thrones’: Living on through video games