So, if you’re still here then you saw what I saw and you know that Two, Three, and Four’s pre-memory wipe personas are total, lawless dicks. Clearly, we knew this in theory, but it is something to behold actually seeing them in action. Let’s start from the top of the hour.

During the episode’s cold open, Five is running like something straight out of a nightmare might be chasing her through the Raza’s empty corridors. She runs and finds a hiding place, but her pursuers find her with ease. Initially, with the possible traitor or traitors onboard I was expecting to see Nyx, Arax, or Devon. Alas, it was instead members of her own crew shoving guns in Five’s face and demanding to know who she was. At that moment, I paused and said…hmm…this must be a flashback or something to when she first stowed away and they found her.

Nope, but more on that in a few. Credits roll and we see Two and Three enjoying a drink and talking about their dead friend Derek/One. Of course, a nice hot cuppa revenge is on the menu. Before they can get down to that, though they have to deal with their guests. Nyx believes that the crew will surely trust the newcomers, since you know, breaking out of prison together is such a bonding experience. Arax isn’t convinced, and he’s proven correct in his doubts when they find that their movements aboard the Raza have been restricted.

Two and Three make no bones about not trusting the trio aboard their ship. See, I knew they were as smart as they are badass. You know, since last week we found out that one of the three might be a mole. It’s a good plan to keep Nyx and the others mostly confined to one area of the ship. This most especially, since Android is incapacitated and unable to engage the neural link with the ship. For all her badassery when they were trying to get at her files in the first two episodes of the season, it appears that she came away with a few scars that left her damaged. Five and Two checked her out and they all agreed that she needed to shut down completely for 36 hours to let her nanites get to work in fixing her damaged pathways. Seems simple enough. What can possibly go wrong? Well, everything.

Not long after Android goes down for the count, Three and Four get these heinous migraines that eventually knocks them unconscious. Freaking out, Five goes looking for Two and finds her in the same state. With those three out for the count, Six in stasis until they can get him medical attention, and Android completely shut down while her nanites work, Five has no choice, but to trust their new guests to help her figure out what’s happening.

While Devon checks out her friends’ brain activity, a reluctant Five give navigational control to Arax. The ex-prison boss assures the teenager that he knows a safe place where they can hide out until things get sorted. Five is too worried about Devon examining Two any further and discovering that the Raza’s leader isn’t quite human. Too bad she didn’t stick around because Arax immediately shows his true colors and sent a transmission to Alicia Reynaud (Inga Cadranel, Orphan Black). He’s the mole she spoke at the end of last week’s episode and clearly both mean very bad things for our crew.

However, Arax’s reveal as uber-shady bastard takes a backseat when Five comes face-to-face with a version of her friend, Two, who has absolutely no memory of the teenager. Uh-oh. Did Devon or Arax poison the Raza crew members and scramble their brains somehow. Or maybe it was Nyx? Nope. Five and the audience are clued into the truth of the situation when Portia Lin (Yes! Two!) radios Boone to tell him that they have intruders and he tells her that he and Ryo are aware of the situation. These are not the people that Five knows and loves and that love her in return. These are hardcore mercenaries.

Five is quickly put on lockdown along with Arax and Devon, while Five’s “former” crewmates get down to the business of figuring out what the hell is going on. Initially, they dismiss Five’s claims that she’s a part of the crew and that they’re actually not criminal scumbags, anymore. The computers back her up and the others can’t get around the fact that they’ve lost an entire year of their lives and the money in their safe.

Nyx who escaped the dragnet, manages to free Five and the others. She also took the time to raid Three’s quarters for weapons. I knew I liked that chick. Portia Lin is too busy to give chase. She’s obsessed or intoxicated rather with the idea of gaining control of the entire ship using her neural link. Desperate, Five attempts to do the same and ends up fighting it out with Portia Lin within that neural pathway. Like something in a dream or even in Portia Lin’s subconscious, Five manages to face off with the other woman in a time in space where Portia Lin is at the disadvantage. Five helps her friends tap back into their memories from that past year and become better than they were.

Android awakens from her shutdown and reveals that yes a copy of the trio’s previous memory is available whenever they want to tap into their past and the ruthless mercenaries that they were. She does warn that there is every possibility that having these memories will change them fundamentally. Translation? If they get their memories back, they’ll become the same dicks that threatened to sell Five and the others into slavery just hours before.

The group decides against accessing those memories again. Alls well that ends well and all that, right? Except the part where Five gives Three a box of his old things that had been previously locked away and he accidently sets off a distress beacon that announces the position of Marcus Boone to some very scummy looking individuals.

What did you think of this week’s installment? What exactly does Alicia Reynaud want with our crew and how long before they discover the truth about Arax? Six won’t have to spend the entire season in stasis, right? He’s got some major making up to do, and isn’t it enough that we lost One? Hit the comments below and let me know what you thought!

Dark Matter airs Fridays 10/9c on Syfy. For more Dark Matter news, be sure to check out PureFandom.com. Also, don’t forget to listen to my recent interview with the show’s own Melissa O’Neil aka Two. Check out the episode of “Brad and Cort Talk” here for more insights into the character and actress. 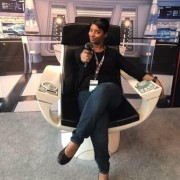